If you have any questions about the list, or if you feel that some problems need clarifications, please write to us using the contact form. We will publish your questions and our answers below for each problem.

When a thin metal wire is placed on top of a Tesla coil, the wire shoots off sparks from  its ends and acquires a rotational motion, as if propelled by the sparks.

Explain the phenomenon. Optimize the electrical and mechanical part of the setup to obtain the maximum rotational speed. What is the efficiency of such an engine compared with conventional electric engines?

When making a choice or playing a game, we employ methods such as tossing a coin, rolling dice, or, throwing a Yut stick. Yut sticks are roughly half-cylindrical in shape and as such it is much easier to bias the outcome of up vs. down than it is for a coin or dice. If the floor is soft, then the stick is likely to have its flat side up, as the round side has a larger surface. If the floor is hard and the stick is ‘rolled’, the stick is likely to have its round side up. How does the probability of the outcomes depend on the relevant parameters?

A simple radio can be made even from a potato. Will the quality of the sound depend on the fruit/vegetable type and/or any other parameters? What hypothetical plant could provide high fidelity sound? Can the setup be modified in order for it to work as a radio transmitter?

Certain species of trees (such as maple, ash, or the guapuruvo) produce a type of dry fruit known as a samara. It has a winged structure that allows the seeds to be carried by the wind over large distances.  How does the terminal speed of a samara depend on the relevant parameters?  Is it more efficient than a parachute? 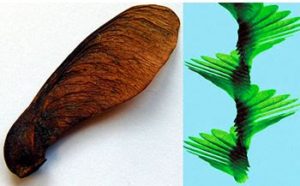 When a ball lying on a hard and flat surface is hit by a jet of water that falls perpendicular to the surface, it may start to oscillate. Investigate how the oscillations depend on the relevant parameters.

It is universally believed that the fall of a pencil leads to the breakage of its graphite rod. What is the probability of fracture? How does this probability depend on the height of the fall and the length of the pencil? Propose an effective non-invasive technique to test whether the rod of a pencil is damaged.

Sometimes, when we place a glass upside down on a wet flat table, it starts moving. Investigate its speed dependence on the relevant parameters and try to maximize it.

Bubbles float in all directions when a jet of water pours from the tap into a container. Investigate the distribution of the distance to the jet from which bubbles escape, and its dependence on the impact velocity of the jet with the water and the depth of the water tank. Will the situation qualitatively change in a waterfall?

The sound of an approaching train, propagating in metals, reaches our ears earlier than the train arrives. Is it possible to estimate the distance to the train and speed of its movement using this phenomenon? Estimate the accuracy and precision of your method.

Consider a flyer with a center of mass that is shifted from its geometrical center. Explain the flyer’s trajectory and discuss the influence of the center of mass location and other relevant parameters on the maximum height and the stability of the flight.

If you stack many small cylindrical magnets, the resulting stick of the magnets will have some elasticity. Is it possible make it sufficiently elastic to join both ends of the magnet stick? If yes, what is the minimal attainable ratio of the radius of the resulting circle of magnets to the single magnet radius?

With charged rods or balloons one can make a fine water jet bend. Study the jet trajectory. What is the smallest radius of curvature of the water jet that can be achieved? Are loops or helices possible?

A closed loop of string fed between two high-speed rotating wheels seems to defy gravity. Explain the overall shape of the loop and investigate the propagation of waves on the string.

Propose and implement a method to determine the irradiance and color temperature of a light source by using solar cell materials? How accurately can they be measured? What are the limitations of your method? What are the relevant parameters?

Take a large flat dish (of at least 30 cm in diameter) and fill it with water to a 2cm depth. Next, gently pour 1 liter of dry sand on it from a height of around 40 cm. After a few seconds, a sand stalagmite starts to rise from the dish. What is the maximal height you can reach by this construction method? What are the most relevant parameters controlling that maximal height?

If you project in real time what a camera is recording and use that camera to film this projection, you will see a pattern of recursively nested images (the so-called Droste effect). Due to the finite speed of light and processing time of the camera, each image will be slightly shifted in time. Determine under what conditions can the effect be used to measure the speed of light.

Shock Diamonds are diamond-shaped structures appearing in the super-sonic flow exhaust from a propelling nozzle. Although very common in the exhaust of aerospace propulsion system, the phenomenon may also appear in other systems. Using standard laboratory equipment, construct a setup to effectively observe Shock Diamonds, specifying the important parameters and methodological considerations employed in their creation and observation.

Investigate the dependence of the shape and number of diamonds on the important parameters. What properties of the gas and jet can be inferred from your observations?

Many thanks to all the people who contributed to
the problem list and helped with the problem selection!

Please enter the Page ID of the Facebook feed you'd like to display. You can do this in either the Custom Facebook Feed plugin settings or in the shortcode itself. For example, [custom-facebook-feed id=YOUR_PAGE_ID_HERE].

The 8th IPT takes place at ESPCI Paris, starting from Monday 18 April! Most of the events which will take place during the week are open to the public. You will find every important informations (schedule and access) on this page.